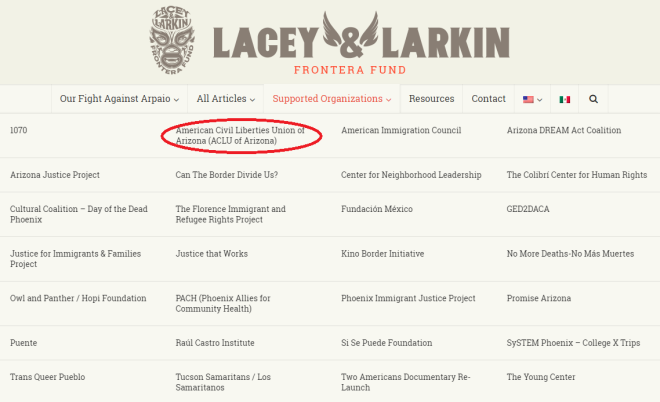 The time has come for me and the A.C.L.U. to part ways. As they seem to have parted ways with common sense.

We have a major problem in this country with a “no rules wild west” Internet and criminal minds are using this climate to profit off the misery of homeless children by selling them for sex online.

This degrades our entire country not to mention it costs every taxpayer to deal with it. We spend millions upon millions of dollars every year in law enforcement and damage control. That is money that is not being used to help other people.

I have been a long time member and supporter of the A.C.L.U. mainly because I felt the A.C.L.U. was a frontline defense against bigots, who I consider a menace to society.  By “bigot”, I mean one who condemns broad sections of a society only because of their race, sex, sexual preference, religious affiliation, political affiliation, or other identification through which they are trying to survive.

The A.C.L.U. motto (recently stolen by a new and upcoming activist) is “We don’t back down”.

This is the most common definition of the word as it is used today:

Bigot: A person who is intolerant of those holding different opinions.

Endorsing child abuse is not an opinion, it is a crime.

Domestic Minor Sex Trafficking is a Form of Child Abuse in more than half of the states we live in. And in the other the half we have pending legislation to make it so.

It would not take your average human being even with a low I.Q. to realize selling children for sex is a form of abuse. That we have to write it into law clears the area from gray into a very black and white understanding.
Truthfully, I should have detached myself from the A.C.L.U. when they recently declared White Supremacists should be allowed “Hate Speech” as part of their “freedom of speech”.  I must have been half asleep.
https://bangordailynews.com/2017/08/19/news/aclu-under-fire-for-legal-support-of-white-nationalist-groups/
https://www.cnn.com/2017/08/16/politics/aclu-free-speech-white-supremacy/index.html
Now that the A.C.L.U.  are in a fight to suppress legislation that would guarantee a child’s right to fight back against being sold for sex on the Internet, (The Stop Enabling Sex Traffickers Act knows as #SESTA),  it could not be more clear to me that the A.C.L.U. has drifted itself, into a menace to society.
They are currently railing against unfair treatment of immigrants with the left hand while pushing America’s children into the closet with their right. In letters opposing the legislation that would hold sex traffickers accountable for their actions, they actually describe child sex trafficking as a form of “artistic expression”, and “commercial and artistic free speech”.

Further, the A.C.L.U. complains that any efforts to curb selling children for sex on the Internet might “discourage entrepreneurs”.  How is that for sadistic disregard for victims?  The children should be collateral damage for entrepreneurs.

The Criminal Sex Trafficking Syndicate #Backpage, which is the reason the American taxpayers have been taxed millions upon millions of dollars to battle this plague, has been paying propaganda and lobby artists very generously to obstruct justice.  When I contacted the A.C.L.U. and asked point blank if they were receiving cash infusions from the crime syndicate through the owners, attorneys or lobbyists, I could not get an answer.
See I Am Jane Doe for full Back Story:
Read Senate Investigations Report for further enlightenment:
https://www.hsgac.senate.gov/subcommittees/investigations/hearings/backpagecoms-knowing-facilitation-of-online-sex-trafficking
Upon viewing the A.C.L.U. website they describe themselves as “bipartisan and nonprofit”.   They are neither, and I have no idea why they have not been charged with mass marketing fraud.  I have not been able to find anywhere a disclosure of the current paychecks their executives take home. And you know they profit from the misery as fast as they can publicize it.
https://www.aclu.org/
The full screaming protest from the A.C.L.U. to Stop Enabling Sex Traffickers #SESTA can be found here:
https://www.aclu.org/letter/aclu-letter-opposing-sesta
While the A.C.L.U. has done NOTHING ever, to curb this criminality, and human rights abuse, they criticise any remedy as “flawed”.
Meanwhile, as they work to enable sex trafficking of children, and obstruct justice so that thousands of vulnerable children will be prevented justice, they are blowing this out on Twitter: