Above are various mug shots for Mike Lacey, recently arrested on pimping charges.  He was the owner/investor of the Village Voice along with James Larkin, as well, the owner of Phoenix New Times and several other websites.

Like the Village Voice, Phoenix New Times became a “giveaway” flyer.  The “paper” was the front for the online advertising of Backpage.com.

As far back as 2011 protesters stood in front of Phoenix New Times as it was the other front for Backpage.com prostitution/child sex trafficking Internet site.

The executives and staff that worked at the Village Voice and Phoenix New Times gaslighted anyone stepping forward concerned about the children being trafficked on Backpage.com, as “religious zealots”, religious nuts”, “politically motivated” or “greedy for funding from Congress”.  In other words, they were all crazy, hallucinatory, or filthy with hidden agendas.

Lacey was arrested along with James Larkin on pimping charges and their pity plea has been, “Freedom of Speech”.

“The actions of the California and Texas Attorneys General are flatly illegal”, Liz McDougall, general counsel for Backpage, said in a statement to CNNMoney Friday evening. “They ignore the holdings of numerous federal courts that the First Amendment protects the ads on Backpage.com.”

Hmmm, that would not be Lacey’s “freedom of speech”.  It is the freedom of speech of the people placing the ads sex trafficking.   None of them are complaining, are they? Never mind, let’s not get reasonable at this late date.

According to a criminal complaint filed in California, Backpage accepted at least $2 million a month between October 2014 and May 2015 in payments from people posting adult ads in California, including payments for postings that featured minors.  There was solid evidence  Backpage.com staff were actively engaged in aiding and amplifying sex trafficking of women and children.

Lacey founded the Phoenix New Times in 1970 — and a dozen weeklies in cities across the country.  Lord knows he had decades between that, the Village Voice, and other media investments, to run his mouth until his tongue dropped out, and to speak freely as often he cared.  But he has now included human trafficking and child sex trafficking as part of his “freedoms”.

In these new conditions, with the Internet up, and newspapers folding, he, and his staff relied on human/sex trafficking dollars paid for advertising in the classifieds sections of the papers, for selling women and children.  The papers became “giveaways” (free flyers) And this became a platform for “freedom of speech”.   Pimping, investing in selling children and women, became “freedom of speech”.

In court, however, Lacey pleaded the fifth.  He did not care for any “freedom of speech”.

It didn’t end there.  Lacey was discovered sending checks to former staff that could actually receive a subpoena,  making local politicians,  and tampering with court proceedings. He was also held in contempt of court for refusing to comply with the investigation.

Stephen Lemons was one of the people that took 5000.00 of payola from Lacey while Lacey was on the lam.

All said Lacey and his partners played corporate shill games as well.  Having the business placed under Carl Ferrer in Amsterdam. After they loaned him the money to buy them out.

After managing to escape justice through all manner of shady dealings including claiming to be a victim of having his first amendment rights violated, Lacey skipped out free to continue until he was further busted by Senate findings.  It came to light that “moderators” (ad takers)  for Backpage classifieds,  were coaching people on how to place the ads while Lacey and his partner Larkin, were pocketing the revenue.

After getting busted by the discovery of emails proving Backpage.com staff were editing ads for prostitution, (actually pimping),  Mike Lacey closed Backpage right before a Senate hearing to avoid the press of it all.

But Lacey pleaded “victim” that fell under “relentless pressure” from a government that trampled on his “first amendment” rights to invest in pimping and sex trafficking.

The most recent scandal involved Lacey and his partner Larkin giving tens of thousands of dollars in donations to local political figures in Arizona. Using their own spouses as shills.

Last week Lacey’s paper (Lacey is “former owner” at this time, that possible corporate shilling I have not looked into yet) Phoenix New Times, ran a front page invitation to his pity party, gaslighting anyone that might have paid attention to his most recent criminality.  The writer was Stephen Lemons.

I do wonder how many hours Lacey spent viewing photos from the photo shoot, trying to decide which one would make him look victimized or human. At any rate, they chose this one.

And Stephen describes him as the victim in the fight for “freedom of speech”.  A freedom fighter!  Backpage was making two million a month from sex trafficking near the end. Poor Mike.

Oddly, the same day this was published Stephen Lemons announced he is taking a new job in Alabama after thirteen years at the Phoenix New Times, hero worshiping Lacey and Larkin in his farewell, and lamenting that he was not able to extort sex, for publishing stories.

Good thing I grabbed a snapshot, after some taunting on Twitter about him publishing a story for Lacey pity the same day he leaves, (Severance pay? Bonus? )  he removed it. 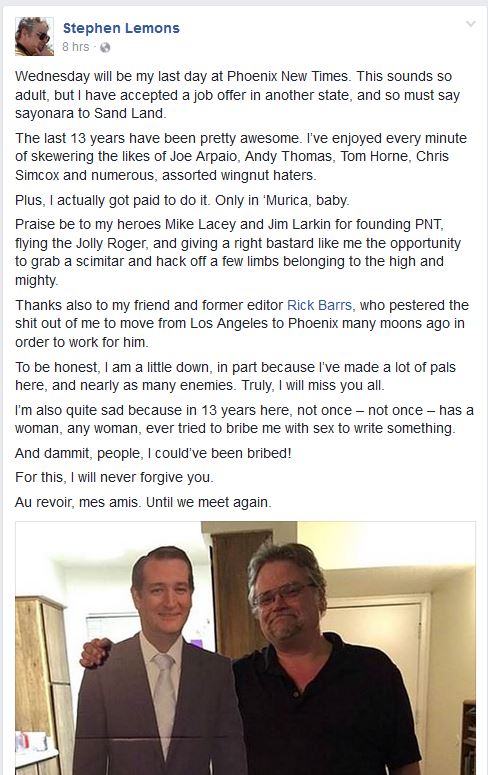 In the event this has all become a very complex issue for you to wrap your head around, rest assured it was the intention of Lacey, Larkin, their legal representatives, and staff, to make it seem too complicated to understand this simple criminality. Organized crime and racketeering. 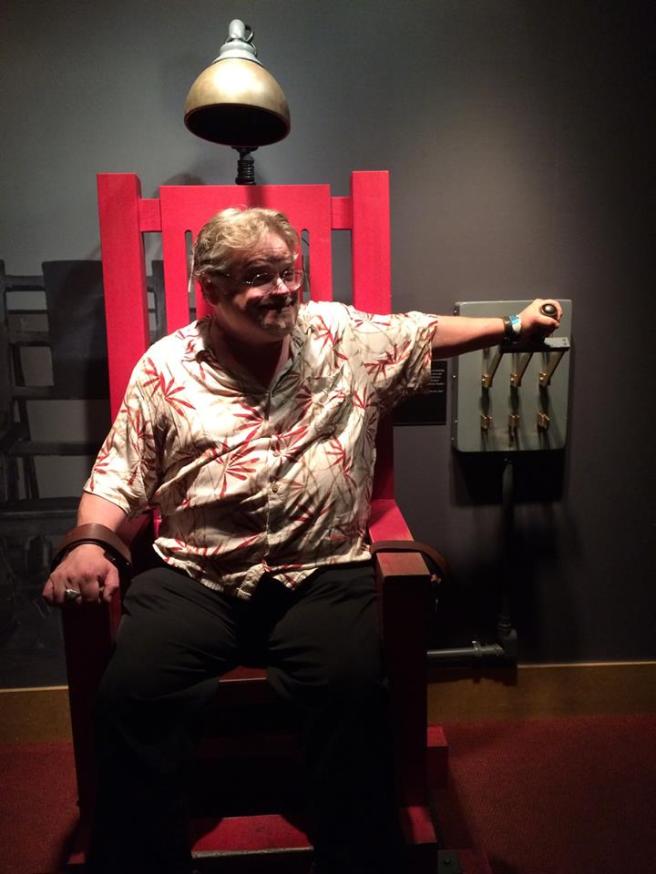 Stephen Lemons If only justice were this swift.

Not everyone in Phoenix is sad to see him go.

A few days later, Phoenix New Times showcased a “successful pimp” in his 70’s. “Not unusual,” the article said.  And now that Lacey is not the “proper” owner, and backpage.com has shut its adult section, sex trafficking is even addressed.  Boasting of the rising demand for buying children for sex.

Causes me wonder how much Lacey and Lemons would protect “Freedom of Speech” ads if folks could go online and hire a hit man without much ado?

As Mike Lacey is released on a million dollar bond after his partner Carl Ferrer comes clean with the feds, He is seen exiting the courthouse with his wife in Phoenix and who is lurking in the background?  Steven Lemons.  Creepy.

Update May 29, 2018   Stephen Lemons is writing the propaganda pieces for Mike Lacey: